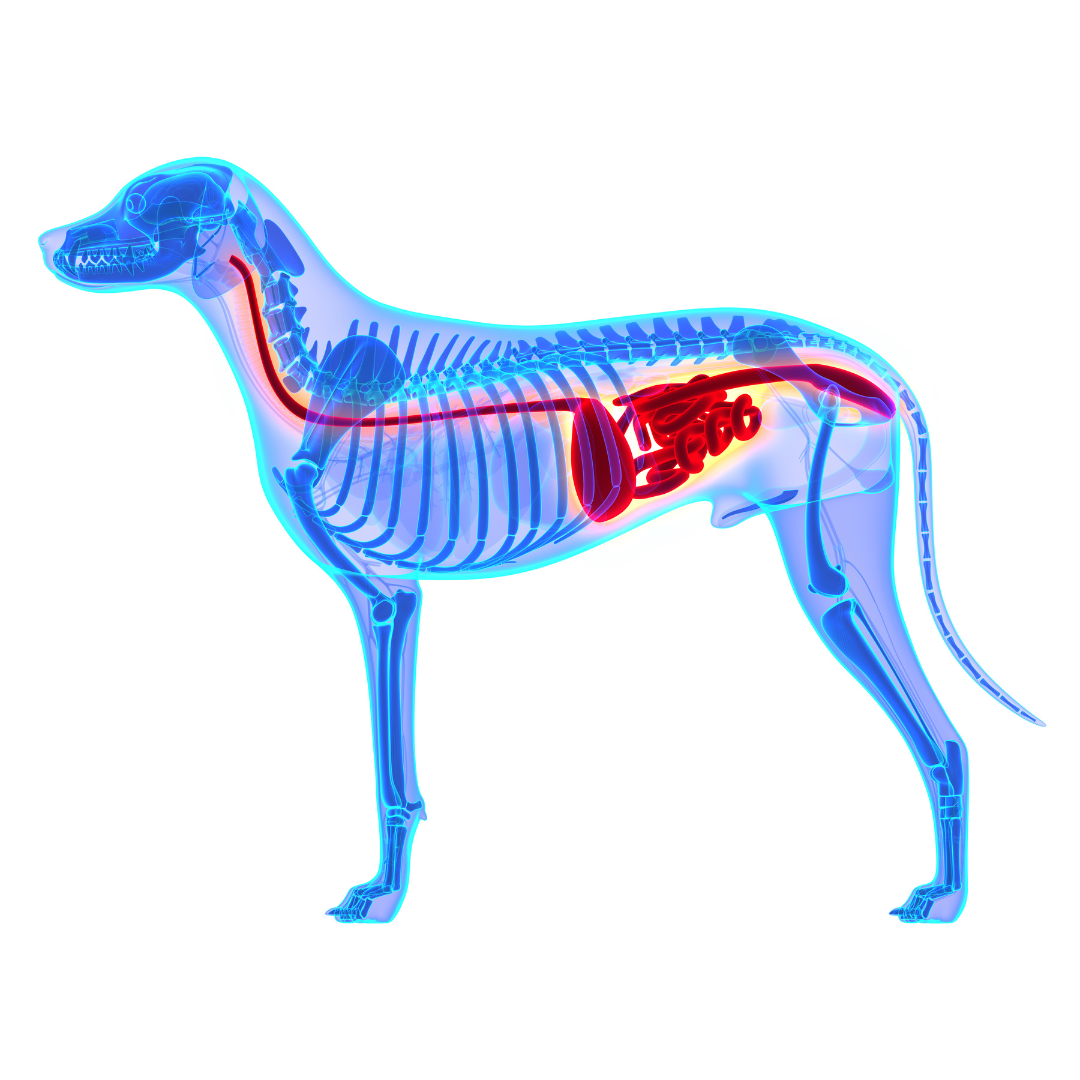 How Does a Dog’s Digestive System Work?

It’s meal time and you give your furry best buddy his food. But did you ever wonder what happens when you feed him? Or how does a dog’s digestive system work at all? It’s pretty important, actually, to his health and well-being, so check out how important each bite he takes really is.

It’s no secret that good nutrition is key for our bodies to function at their best and that’s the same for your dog too. You pay attention to what goes in, and you obviously pay attention to what comes out (how could you not?), but have you ever really thought about what happens when a dog digests food? How does a dog’s digestive system work and how does it ensure he’s getting the nutrition he should? After all, nutrients in your dog’s food are what he needs to have energy and a healthy immune system. What happens to digest, absorb and metabolize the food your dog eats?

When your dog starts to eat, his body starts to digest food. This takes place through his digestive system, and it’s how the food you feed him is broken down to fuel his body and build up his immune system.

It starts when he starts to ‘chew’ the food and his body begins to create digestive enzymes to help break it down. As it is chewed, it goes down his esophagus through several organs and eventually the residual waste that isn’t broken down and absorbed comes out his backside as poop.

The three main classes of nutrients he breaks down are proteins, fats and carbohydrates. Even though he’s also likely taking in other nutrients like vitamins, minerals and even water, they are absorbed into his body in pretty much the same form they come in as, although they often need to be released from the carbs, proteins or fats they were attached to.

In your dog’s mouth, saliva starts helping the digestive process. It has a lubricant (mucus) that coats it to make it easier when it’s swallowed and to make it an easier trip through the digestive system.

After your dog swallows his food, it goes down his esophagus. The muscles in the esophagus contract to help push it through (a wave motion called peristalsis) and get it to the stomach. The stomach is a multi-faceted organ. It stores food, mixes food (digestive enzymes and acids add in to help food break down) and it acts as a monitor valve that keeps it moving at an appropriate rate to its next stop, the small intestine.

In the stomach, protein-digesting enzymes are secreted (these are called proteases), as well as more mucus and hydrochloric acid (produced by the stomach). Pepsin in its inactivated form (pepsinogen) is secreted to stop the stomach from digesting the cells that it needs to continue to produce it and is activated when hydrochloric acid gets there. This activated Pepsin allows enzymes to do their work of breaking down food while mucus lubricates it more and protects your dog’s stomach lining–otherwise, it would be digested by its own enzymes!

All the secretion of enzymes, mucus and acid is based on the quantity and composition of the food your dog eats. Hormones and nerves regulate this, and inside the wall of the stomach is muscular. The pyloric region is where your dog’s stomach connects to his intestines and once the stomach contents are well-mixed, they’re pushed toward his pyloric sphincter. This is basically a muscle ring that regulates the passage of to the small intestine. By the time your dog’s stomach contents have made it to this point in the digestive process, it’s now called chyme and it’s a thick, milky liquid. Being in liquid form, combined with strong stomach waves allow it to pass through the pyloric sphincter and into the first part of his small intestine, or the duodenum. The more fluid the chyme is, the easier it passes.

The main site for digestion in the small intestine is the duodenum. At this point, even more digestive enzymes (proteases for protein, amylase for carbs and lipase for fats) are added into the chyme, with the goal of breaking food down even more for maximum nutrient absorption. The pancreas is one of the major glands of the body and it releases both digestive enzymes into your dog’s gut and hormones into his blood.

Pancreatic juice also neutralizes the pretty acidic chyme because it has sodium bicarbonate (a common digestive aid). The pancreas also helps regulate blood sugar levels with the insulin it releases.

Where, oh where, do the nutrients go?

The liver is associated with the small intestine and digestion in a big way. Bile is always being produced in your dog’s liver and stored in his gallbladder. He passes it into his gut through the bile duct when it’s needed for digestion. Bile has salts that turn fat into teeny little globules that lipase enzymes can process. It’s actually the pigments in bile that gives poop its color. Food is fully digested in the small intestine and once it’s broken into its smallest form, it’s absorbed across the wall of the intestine into the blood. This is how the products of digestion are carried to the liver and metabolized. Fat is absorbed into lymph vessels before it gets transferred to the bloodstream.

The (almost) end of the line

This is the point the large intestine comes into play. By this time, most everything to be digested and absorbed from the food has been done so. It’s in this part of your dog’s gut that water is absorbed and dietary fiber ferments with the aid of bacteria. Feces, or poop, is about 60-70% water, provided your dog is hydrated enough, and the rest of what’s left to be expelled is undigested food, dead bacteria and some inorganic material. Your dog’s rectum then serves as a poop holding place and muscles help him push it through his anal sphincter, hopefully in the form of perfect poop.

Bernie’s Perfect Poop: Poop the way it should be

Bernie’s Perfect Poop is just what every dog needs to allow them maximum nutrient absorption. With the perfect combination of premium fiber, pre- and probiotics and digestive enzymes, Perfect Poop ensures that food makes it through your dog’s digestive system efficiently and at the right speed. A thriving gut is key for breaking down food for maximum absorption, and the pre- and probiotics in Perfect Poop are able to make it through the harsh environment of your dog’s digestive system to help his gut flourish. Added digestive enzymes are like super boosters to make sure the food is at its smallest and most easily absorbed. And all this means your dog will not just have a healthy gut, but a healthy immune system too.

After all, a better diet supplemented with Perfect Poop means a better life!

Whew…who knew there was so much involved with getting food to turn into poop? Although, admittedly, we dogs aren’t really interested in the back end as much as we are chowing down.

But what happens in your dog’s digestive system is important and supplementing it well to ensure it does all it should is what makes it so we get all the nutrients we’re supposed to from every bite.

So make sure you’re adding Perfect Poop to every meal–it’s going to make sure we’re also getting every last bit of nutrition and that means a better gut and better health!